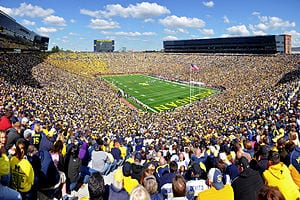 Pictured above is the Big House in Ann Arbor Michigan

Home of the University of Michigan Wolverines

Michigan Stadium, nicknamed “The Big House“, is the footballstadium for the University of Michigan in Ann Arbor, Michigan. It is the largest stadium in the United States, the second largest stadium in the world and the 34th largest sports venue.  Its official capacity is 107,601, but it has hosted crowds in excess of 115,000.

Imagine that after a sold out game that each fan was instructed to place $1 under their seat as they got up to leave the stadium …….

Now, after the stadium is cleared you and only you are allowed to pick up as many of those $1 bills that You would like and take as long as You wanted to take.

How many of those $1 bills would you crawl under the seat for?

I know that if I were You I would crawl under each and every seat and make sure that I got each and every $1 bill as quickly and proficiently as possible before someone changed their mind and made me leave.