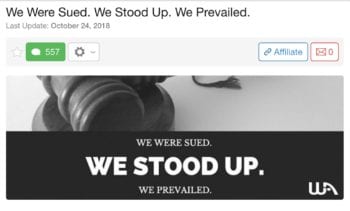 The very same MOBE that has recently been shutdown by the FTC (Federal Trade Commission) for being a Pyramid, Ponzi Scheme that has scammed many people in their time online sharing what they called an online education platform.

Why didn't I, right then and there cancel my membership at Wealthy Affiliate?

Wonderful that you asked, my answer is that I don't believe even a portion of what I read and/or see on the internet because I am a firm believer that the world wide web is the “Bathroom Walls of the 21st Century” and anyone can and most likely will write anything about others that may or may not even be remotely true.

To be completely honest with you, I don't even believe half of the negative reviews on the internet, even if they are shared by members of Wealthy Affiliate. I am not saying that they are being dishonest, I am merely saying that they, in most cases haven't even either signed up or showed up. You, me nor anyone can say with 100% certainty that something is a scam if they haven't even showed up, let alone signed up.

As stated above, M.O.B.E. is the acronym for My Online Business Education and was formerly known as My Online Business Empire and before that as My Top Tier Business. MOBE, Ltd is Now In Receivership and Has Been Declared to be Fraudulent By the Federal Trade Commission.

Known for many up sells and high ticket items, the $49 starting cost is dwarfed by the many thousands and thousands that according to past MOBE members was expected in order for them to keep growing their business. (I was never a member of MOBE) Also disclosed by many past members was that MOBE promotes itself as a program where you can have and grown any niche, the only training and education that was taught was geared towards learning how to promote MOBE.

There are many legitimate online opportunities to learn on the internet that are truly geared towards the promotion of any niche and not just the promotion of the “training” platform itself. My #1 Recommendation is here. 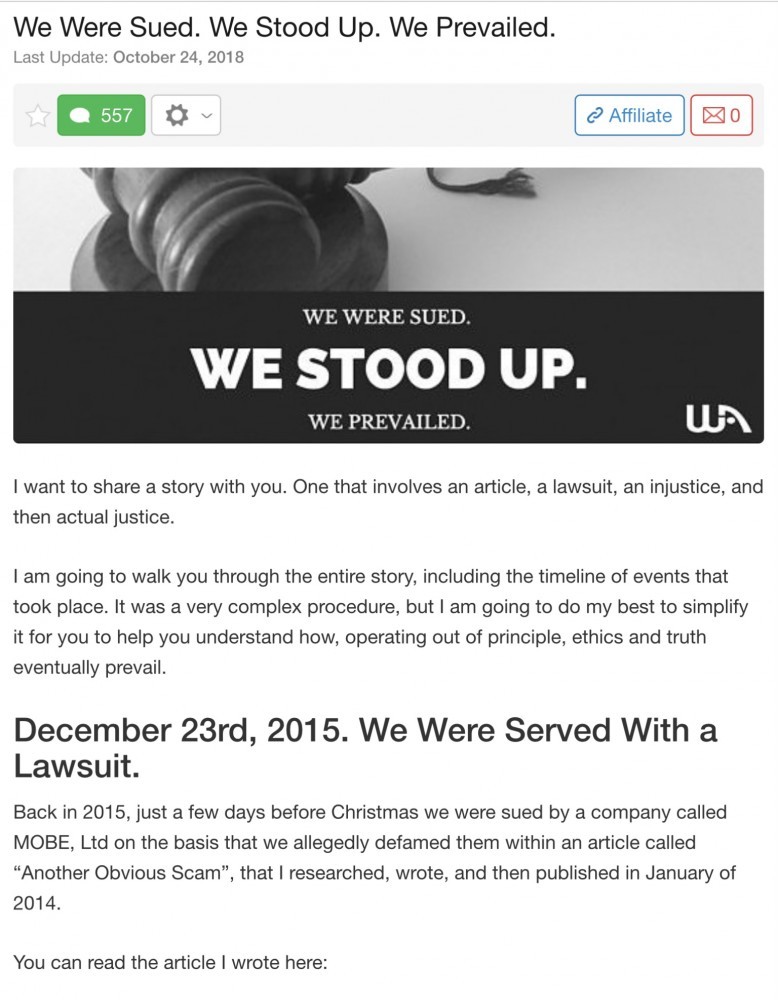 Wealthy Affiliate sued by MOBE, why?

While I must admit that there are indeed many members at WA who write reviews about sites and/or opportunities and give them the above tags, Kyle is a person who does indeed do his due diligence in reviewing sites impartially and fairly.

What I do find to be completely ridiculous and almost comical is that MOBE also blames the reviews written by others who aren't even a part of the Wealthy Affiliate community and never have been on WA and Kyle as well. The reviews in question were even written before Kyle wrote his and are by far more harsh and pointed. Sites like WarriorForum.com etc….

Read Kyle's take on the almost 3 year journey to prevailing against MOBE's accusations by clicking here.

Was Wealthy Affiliate Stagnant during the 3 years?

Not only was WA not stagnant during the 3 years that they were going through the above process, they actually thrived!

The platform, although amazing when I joined in June 2015 is now even more amazing and so amazing that I never intend upon not being a member at Wealthy Affiliate.

Yes, it's that Amazing!

Even though I've been earning an income online since 2009 and all the while assisting friends in learning as well by growing and/or starting their own business, I learn something new at the WA platform every day.

In 2017 alone, there were over 250,000 who became members within the community, not all of them decided to stay but many did. As of now, since the year 2005 when WA first launched as a keyword tool site, there have been over 1.5 Million members worldwide …… That's a lot of people and much more join daily, 1,500,000 and growing = not hitting a plateau anytime soon.

Have I or anyone else who is a member at Wealthy Affiliate written a review of your opportunity that is less than flattering?

Are you going to claim that we are defaming you and/or making false claims, writing fake reviews etc…..

Has your opportunity ever been called a scam, scheme, ponzi, pyramid or the ever creating stigma MLM word?

Just to let you know that I'm not against Multi-Level companies and Direct Sales as I am a firm believer that most within the opportunities are wonderful people, it's just the few that make it tough on the rest of us.

I even share opportunities that some have written false/fake reviews about and I will list them below:

My Final Thoughts on WA being sued by MOBE 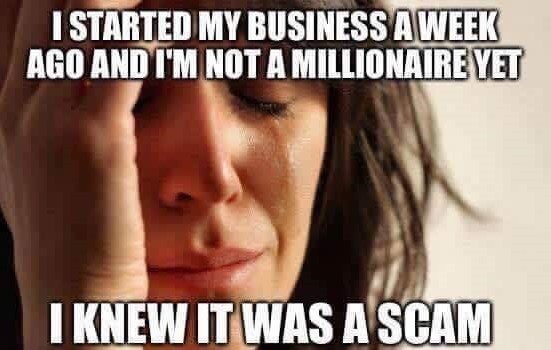 Anyone can be sued by anyone and in today's world, unfortunately there seem to be more and more people who want everything for nothing.

Just like the image above, many people sign up then never show up then put forth far more effort in calling something a scam than they ever did in sharing the opportunity and/or product/service with anyone.

Nothing is more sad for me than to witness a friend who is excited about something only to then not share with a soul and later to complain about the results that they didn't get with the work that they didn't do.

Everything that I share takes time and work, I welcome any and all friends who are truly willing to put forth the effort to utilize what I share and I am always here to assist friends who truly do want to win with their online business.

Thank you friends for reading and also for taking the time to comment at the bottom of this article with your thoughts, questions, feeling etc…..

195 thoughts on “MOBE sued Wealthy Affiliate, are You next?”