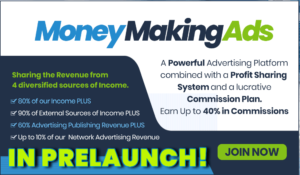 Have you heard about the new Money Making Ads platform?

It just launched yesterday and I signed up during the pre-launch because a close internet friend of mine shared it with me on the CashJuice website.

At first I was hopeful that it would be a great platform to advertise on as well as earn with & that my friends who joined could also do the same…….. that was before I learned who the owner and creator of the platform is.

Now I know that it is indeed Mark Dosier, yes the same Mark Dosier who in January of this year released OneAdPack which is pretty much exactly like the MoneyMakingAds site.

Why did the above change my mind?

Because that site had a mess with not paying it's representatives and other shady practices!

Steer clear of this one my Friends even though the information at their site looks tempting, it is indeed “Too Good to Be True” and almost certainly isn't!

MoneyMakingAds is an extremely powerful advertising site.In addition to the common advertising services they also provide 100% Passive Revenue Adshares with up to 130% Cashback.

Here is what you get at MMA:

As stated earlier, I truly believe that this site won't last long either as it's creator Mark Dosier is the same person who launched OneAdPack in January 2020.